The Art of the Table — Suze-la-Rousse

Theatre of flavours and pleasures, conviviality and values, the table directs objects and actors as well as rituals which vary depending on the century and the dwelling in which the meal is served.

The Art of the Table, from Ancient Rome to today

At the château of Suze-la-Rousse, an archaeologist, an artist, two art historians, and culinary designers have been invited to create a table representative of a given period from Ancient Rome to today. Each has recreated or invented a table, chosen the setting, the furniture, the tableware whilst highlighting the rituals around meals. Table manners thus emerge, all as peculiar as one another, the pleasure of the performance is showing through: "The table is a stage, whatever the place, the conditions, whatever the period and the quality of the meal being served: one talks, one tastes, one eats there. The body is in action, an actor. The stage design is singular. The acting also. The emotion, the passions, the feelings are all there" (1).

Based on private and public collections, antique objects and contemporary creations, this exhibition examines the way of living and behaving in society in past and present times.

For further information on the event, see below in French.

with the participation of:

Through the various rooms

A laid table at the beginning of the 19th century.

A laid table at the beginning of the 19th century: the taste of an imaginary supper.
In connection with the exhibition entitled Arts et manières de table ("The Art of the Table") at the château of Suze-la-Rousse, a table from the beginning of the 19th century has been laid in the neoclassical antechamber of the château of Grignan. Invited to imagine this decor of elegance, Art historian Jacqueline Queneau has created an arrangement based on a collection gathered with passion by her and her husband Philippe Irrmann: fine earthenware, glassware, silverware and decorative objects.

A laid table at the beginning of the 19th century. 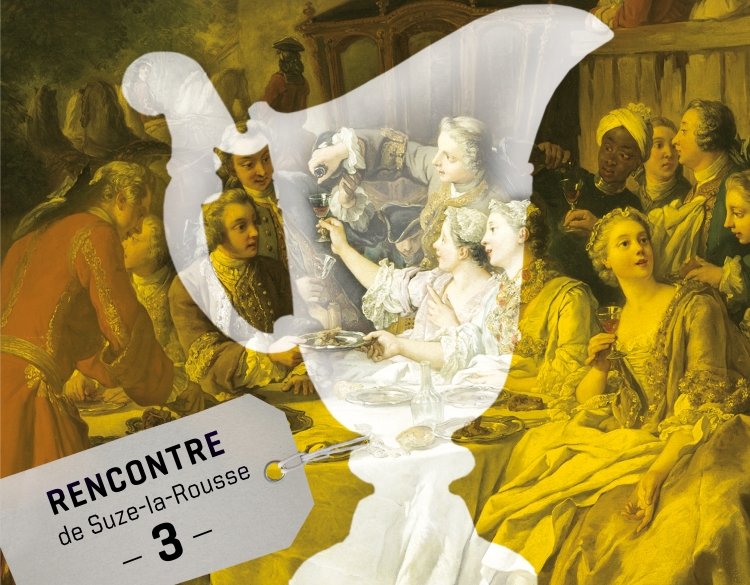